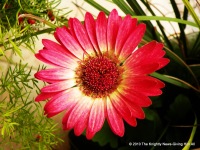 Sometime last year, I removed the “fake” silk flowers from the pots stationed at my front door in sentinel fashion.

My “real” flowers had died due to lack of water, but the pretty, lacy, Creeping Jenny had survived.

I had complained about my lack of time to “green up” my thumb and a friend had suggested, “Put some fake flowers in the pot! No one will ever notice!”

So I had plopped some lively looking silks in the pot…you know…. to keep up appearances. But since the colors of the silks had faded, it was time (long past time) to remove them from their station. 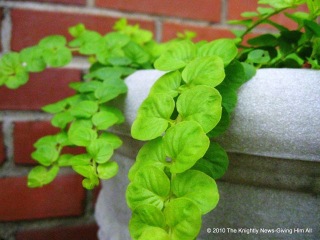 Days later as I stepped up to enter the door, I looked down and noticed all the new growth of the Creeping Jenny.

With the “fake”  removed, the little peeping, creeping ground cover had plenty of room to shoot forth in new growth! It was then that I thought of all the times we “put on” a pretty façade of having and doing the right things in life–in order to “fit in.” Yet, all the while we lack spiritual growth. Many times it’s because we have not removed the “dead or fake” from our lives, and Christ has no room to grow and mature us into what HE intends for us to be!

“The righteous shall flourish like the palm tree: he shall grow like a cedar in Lebanon. Those that be planted in the house of the LORD shall flourish in the courts of our God. They shall still bring forth fruit in old age; they shall be fat and flourishing; To shew that the LORD [is] upright: [he is] my rock, and [there is] no unrighteousness in him.” Psalm 92:12-15 KJV

Join me today in seeking to weed out what is unnecessary–the things that we tuck in just to “keep up appearances.”

The very burden of that idea of having to conform to others is what weighs us down!

God has called us to a specific walk. What He requires of me will sometimes look different than what He may require of you. But the goal is to seek HIM daily, allow HIM to do the uprooting of the fake: planting instead righteousness and all the spiritual gifts that will bring GLORY to HIS NAME!

By the way, “fake plants” have no roots. They only look good a short time as the sun fades them quickly–and when you get close—you can tell they are fake… Just in case you wondered.

On a journey with purpose, with my best friend and love of my life! END_OF_DOCUMENT_TOKEN_TO_BE_REPLACED
This entry was posted on Tuesday, October 9th, 2012 at 3:02 pm and posted in Country Life Messages, Devotion, faith. You can follow any responses to this entry through the RSS 2.0 feed.
« Buckle Your Seat-belt–or Get out of the car now
Afterwards »