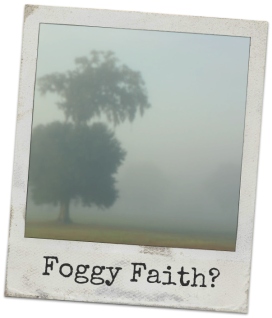 A few years ago, I wrote a devotion for Internet Cafe` called “Faith in the Fog”…it may be worth a re-visit if you have time (click on the link)…here are some new thoughts on that–which came to me after a drive to Tallahassee…and reading a post by my dear friend Marsha Harwood on Facebook…and like Marsha, I will borrow from a writing of Corrie Ten Boom.

“When a train goes through a tunnel and it gets dark, you don’t throw away the ticket and jump off.  You sit still and trust the engineer.”

I’ve been in the dark before…when you don’t know where you are–it can be pretty scary.

And sometimes, even when you are very familiar with your surroundings…it can still be a bit discomforting.  However, there are those “real life” instances when the snuffing out of the lights happens so suddenly, we are taken completely by surprise.

This past Saturday I was driving on the interstate with a favorite passenger of mine.  We were talking about what God is doing in our lives and in the churches in our area–and all of a sudden–from out of nowhere, we were engulfed in a fog so thick everyone hit their brakes.

This particular fog looked like a dense cloud of smoke that had settled on the highway.  It completely covered the two lanes we were on–but not the opposite side of the road.  Afraid that perhaps someone had a wreck and the smoke was the result–my guts clinched in a knot.

We both stopped talking.

Time for concentration…and we prayed.

As we entered the great expanse of darkness–I was amazed at the fact there was no smell of smoke…I decided then–it was “fog”.  The thickest–[way past the pea-soup stage]–fog I had ever encountered.  It caused me to suck in air–as if that alone would help me get through the murky road.

As we went along, the semi-truck in front of me seemed to lurch to one side suddenly as I noticed he avoided a car that was trying to pull back onto the highway.  (That one was a NUT.)

Let me tell you what I discovered just by watching the actions of other drivers on the road that day….

You may be thinking…this is not a “devotional” post here, Angie.  But–I beg to differ.

Re-read.   Turn that interstate highway into your walk with God.   Perhaps you have just stepped out in faith–or maybe, you stepped out awhile back…and there have been more foggy days than sunshiny ones…and maybe you have grown a bit discouraged by what you’ve not seen–even though you are seeking…and expecting…and yes, even believing!  (Been there.)

Can I tell you that just because we don’t see the “results” we may have expected…and just because things have become dark at times…that is no reason to stop.  No reason to pull off the road until things clear up a bit.

Friend, there have been some “doozy days” in my own life in the past 4 years…but I wouldn’t trade a second foggy second–for the clearest-brightest day.

In the fog, Jesus taught me how to trust.  How to lean on HIM and not my own understanding.

In the fog, Jesus taught me how to “see”k Him first–and continually.

Can I encourage you today?  If you were here–or I were there–I’d hug you and tell you very clear–our God is bigger than the fog is thick.  Don’t hang back.  Keep doing the things He has placed in your heart to do…you already know what they are–and you are sitting there right now thinking, “but I can’t”.

And hey, as long as I’m handing out advice here–I learned it’s okay for the tense knots to build in your belly…it reminds us that we are NOT in control of a single second of our day…God is.  And as long as He is…then you can relax in HIS arms.  Sometimes though, He sends the foggy reminders just to let us know “He’s got this”…