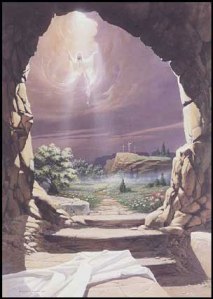 I hope you could feel the excitement of yesterday’s discovery! Aimee shared it with a full and overflowing heart!

I love that He chose us. To tell it—to share it—to be a part of His ministry! When they “went back” to tell what they had discovered…they met the same faces filled with incredulity that you or I would see if we were to tell someone that gas was now on fifty cents per gallon! Some of us might simply choose not to believe, while others might grab our purse and scurry off to the nearest gas station to “see for ourselves”.

I think Peter had the heart that longed for more fellowship. He longed for a chance to “feel” the love coming from the Teacher. His Lord. His Savior. If there was even the slightest possibility that the women were telling the truth —Peter was not going to miss his chance! He needed the assurance of his forgiveness. Perhaps he felt he needed to explain his actions. His fear that caused him to leave, then to curse. And deny. Ever been there?

Have you ever been in the place where you felt you had broken the heart of the person you most loved in all the world? I have felt disappointment for my actions as a teenager, as well as an adult. Wrong choices leaves us with an aching heart. Peter had made a wrong choice. Said the wrong words. To the wrong people. At the wrong time.

So for Peter, the women held out to him a thread of hope in the words they carried. The thread that could lead back to the One he loved the most. He chose to believe the women. He clung to the hope and belief that what Jesus taught them was in fact true.

“However, Peter ran to the tomb to look. Stooping, he peered in and saw the empty linen wrappings; then he went home again, wondering what had happened.” Luke 24:12 NLT

While Peter didn’t “know” exactly what happened….he had hope. He had faith. He believed, although he had not seen. His belief and faith would enable him to preach a fiery message we read in Acts. Peter found his voice. On the day of Pentecost, when the Holy Spirit fell….Peter found his voice. He had reason to shout from the roof tops…and fear didn’t enter the picture!

Then Peter stepped forward with the eleven other apostles and shouted to the crowd, “Listen carefully, all of you, fellow Jews and residents of Jerusalem! Make no mistake about this… Acts 2:14 NLT with that introduction, he embarked on the beginning of a Pentecostal Sermon if there ever was one! AND there was about 3,000 saved and baptized after that message! GLORY!

I pray for a Holy Spirit empowerment in each of our lives…as we have NEVER before experienced! Seek Him! Daily! Express to Him your desire for more of Him—He will flood your heart and life with blessings!

Father, You alone are holy! We exalt and magnify Your name! I praise You for choosing to use us. We may sometimes feel like an unlikely vessel. But we are willing. Give us wisdom and knowledge and may we glorify Your name in all we do. Bless each heart and life that shares our study today. We give You all the glory and praise, in Jesus holy name~Amen.

On a journey with purpose, with my best friend and love of my life! END_OF_DOCUMENT_TOKEN_TO_BE_REPLACED
This entry was posted on Wednesday, November 26th, 2008 at 1:01 am and posted in 90 Days with Jesus Bible Study. You can follow any responses to this entry through the RSS 2.0 feed.
« Day Eighty-Six
Where I’ll Be…. »